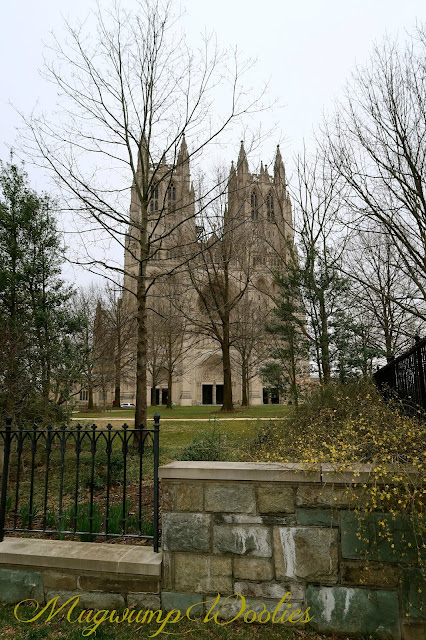 The National Cathedral is the place America goes to eulogize it's patriots and the famous. In recent days, George H.W. Bush and John McCain were remembered here by family and friends. It is an Episcopal Church and it's actual name is the Cathedral Church of St. Peter and St. Paul.

Theodore Roosevelt laid the foundation stone in 1907 and 83 years later George H.W. Bush attended it's completion. When I lived there it always had scaffolding on it somewhere. Once again, the sound of work being done echoes within it's walls. The earthquake that hit Washington in 2011 caused a good deal of damage. The pinnacles of the central tower crashed onto the roof. The total damage is estimated at 34 million dollars. To defray the cost, admission is now charged for tours, but not for services.

This is a photo heavy post. I love this old gem...the carved stone, the architecture, the peacefulness...they are all part of the experience. 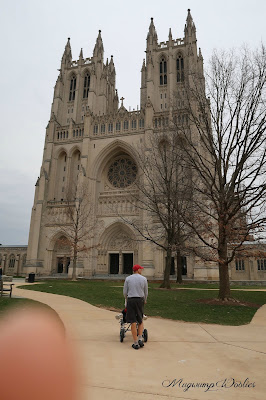 The gloominess of the day added to the serenity of the visit. Excuse my digit. 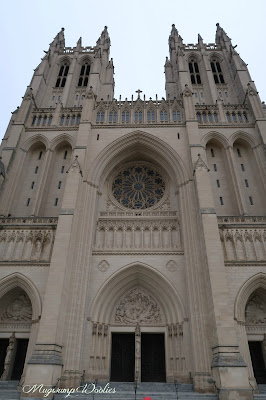 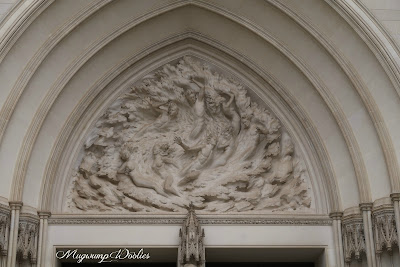 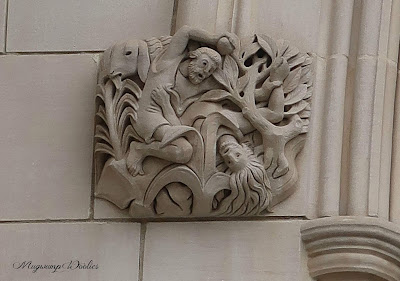 Indiana limestone was used for this Gothic cathedral. 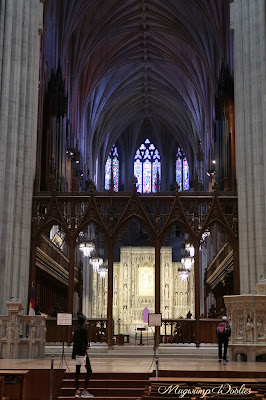 I did not take a pic from the back of the church. When we arrived a service was going on so I moved up the aisle and sat down to listen. Mr. MW and Annie went up to the seventh floor to see the view if the city. I liked the view here.
There was a built up platform over the floor that was not there during the televised funerals of Bush and McCain...don't know what that was about.  On the left is the pulpit where Bush eulogized his father and Meghan McCain her father,.
The main aisle is one tenth of a mile long and it is said you could lay the Washington Monument down in it. 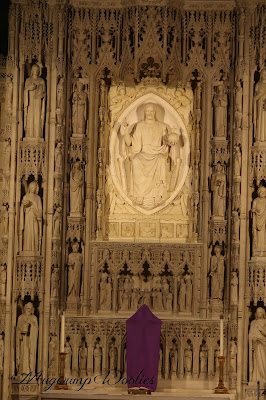 The carvings are unbelievable. Over one hundred figures grace the altar.
The cathedral is a place that needs to be experienced...photos do not do it justice. It is so large and soaring, it's majesty cannot be captured in a small frame. I recommend a Google search and a click on images to experience it a little better. Google National Cathedral Bush funeral to get a glimpse of the enormity of this place. 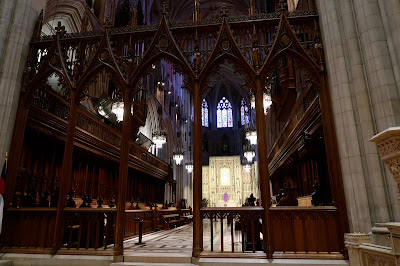 The woodwork is impressive. This is where the choir sits normally, but on this day people attending the service filled it. 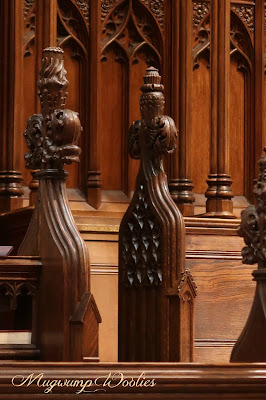 I was drawn to the warmth of the wood. The ornate carving is beautiful. 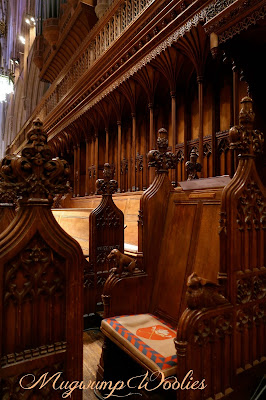 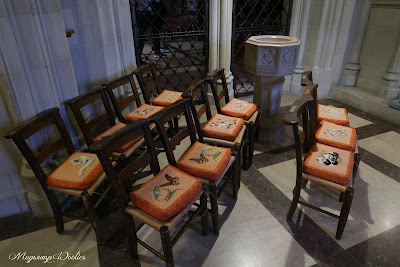 The children's chapel is scaled to an average six year old. Those chairs are tiny! The needlepoint cushions are kneelers and depict animals. This tiny chapel is so sweet and endearing.

There are may kneelers throughout the cathedral...all done in needlepoint by people from all over as the world. 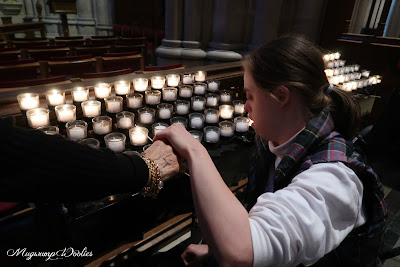 Annie always likes to light a candle. We do this as a family whenever we visit a church while traveling. 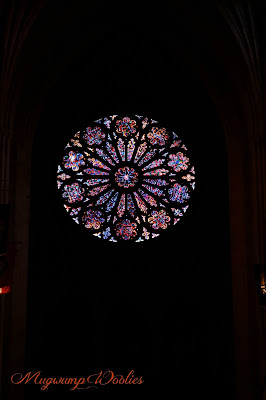 One of the rose windows. 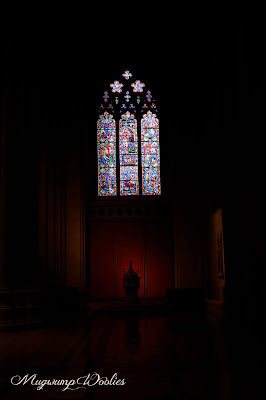 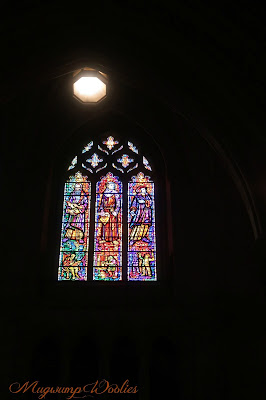 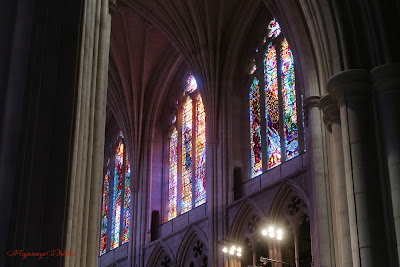 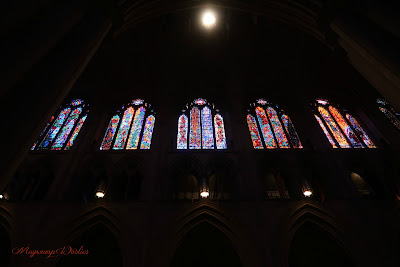 Many famous people are buried here in the cathedral...Helen Keller and Woodrow Wilson are among them. 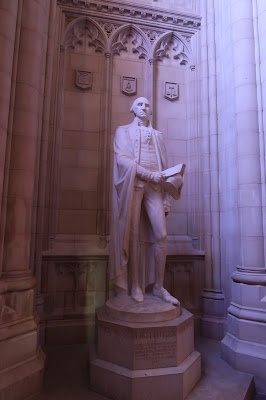 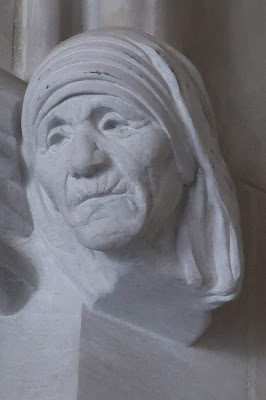 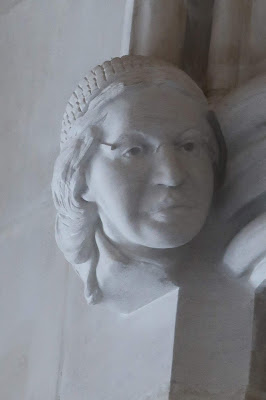 Many others appear within it's walls.

We spent a few hours here looking and learning. If you visit D.C., it's worth a peek.

The cathedral is located close to my alma mater, American University. We drove through the campus just to see the many changes since I was a student there. Also in the area, Embassy Row...we drove by many of the embassies with their country's colorful flags flying. The Naval Observatory is no longer open like it was when I use to drive around this area between classes at AU. It is the home of the vice president and, like so many places we visited, the security is ramped up.

p.s. St Alban's School is on the grounds of the cathedral. It is an elite boy's school with many famous people among it's alumni. 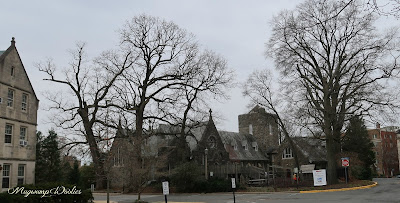 I went to a great picnic here once...with an old beau, now an ob/gyn...given for the graduating class of Georgetown's Medical School. Looks like something from Harry Potter!

Posted by Mugwump Woolies at 6:51 AM