I am happy to tell you my old Canon camera received some TLC on Saturday and it is up and running. We visited Best Buy with the intention of purchasing a new camera. I had tossed the broken one in my purse before we left the house so I could do some comparison shopping. As luck would have it, the fellow that was our salesman was actually a rep from Canon. Long story short...he fiddled around and got my camera working. He spent a lot of time getting it working and I all but offered to adopt him when he was finished. I was so happy! I really like my little point and shoot and did not want to have to buy a new one. It was a good day!

So...I have been taking a few pics around the house. Lately, I have been drawn to antique doll cradles. I now have three that I consider to be pieces of folk art. 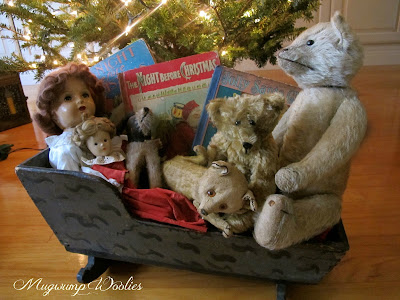 This one is painted grey with black painted squiggles. It is signed on the inside in a lovely early script. It dates to the 1800's. I am using this gem under the tree...filled with early toys and books.

The large bear is early with a hump on his back and elongated arms...a real sweetie. The fox has little fur left but is still charming. The old Christmas books are part of a collection I started many years ago. The black and white dog I purchased from the wonderful folk artist Anne Childs. The dolls...both of these little dolls are from my family and each has a story. 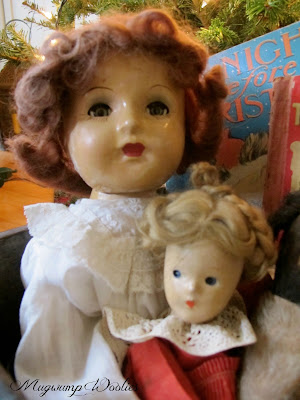 The large doll is even older than I am! My grandmother was the president of The Washington Women's Club when I was very young. It was a service club...much like the Junior League is today. The ladies had this older doll that they dressed and raffled off for charity. My grandfather...Pop Pop...won the doll and supposedly said he knew right where that doll was going...to me. Her clothes have been replaced by me with a more time appropriate dress and shoes. Her pretty face has cracked with age and I had her restrung years ago when her original bands dry rotted. I keep her...Pop Pop's Doll...as I have always called her...on the counter in my laundry room. I see her every day.

The smaller doll belonged to my great uncle. Before he married my great aunt, he had a wife and young daughter that died in an epidemic in the early 1900's. The doll had belonged to his daughter. He was much older than my aunt so he was like a grandfather to me. The doll sat on the back of their sofa and I admired her every year when we would visit them on our annual trip to Florida. Many years later, after they were both gone, the doll went to my mother and my mother gave her to me. Uncle Mason's Doll is wearing an early red dress that is not original to her....but looks smashing on her for the holidays! She is wearing her original red leather shoes.

Two little dolls from my childhood...one gifted to me by my cherished grandfather...one of my most favorite people. The other...passed down through family...by a beloved uncle. Two little dolls, from different sides of my family, full of memories of loved ones gone...but never forgotten. Two little dolls under the Christmas tree.

Time is slipping away and I have much to do...as I'm sure you all do, as well. Why does December fly by at break neck speed? The tree may or may not get decorated...I vote for the latter. I like just the lights and so far a certain daughter has not objected.  I told MR. MW last year that I wasn't going to put up a tree this year...fatigue talking. I relented and we brought home a much smaller tree...in the end I just could not go without a real tree...the German in me, no doubt. Annie's Owl Tree is up and decorated...and two feather trees are done. I'll be back with Bits of Christmas....sometime.

Posted by Mugwump Woolies at 2:56 PM