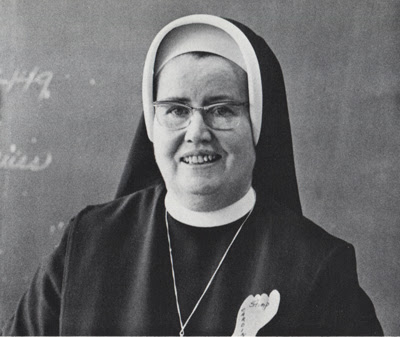 It is with heavy hearts that the O’Connell community shares the news that Sister Michel Marie Graham, I.H.M.passed away on March 29, 2014, at the age of 87.

Sister Michel Marie taught English at O’Connell from 1959 to 1979, sharing her love of literature, writing, and learning with hundreds of O’Connell students. As a teacher, advisor, colleague, and department head, Sister Michele was admired and respected throughout the O’Connell community.
Sister Michel Marie was born in Washington, D.C. and grew up in Falls Church, Va., a short distance from the dairy farm that would eventually make way for Bishop Denis J. O’Connell High School. She graduated from American University in 1947 and joined the Sisters, Servants of the Immaculate Heart of Mary a year later. Sister Michel came to O’Connell to teach English in the girls’ division in 1959, and quickly became moderator for the first issue of the school's newspaper, The Visor. She was highly regarded English teacher who later served as department chair.
Sister Michel was a supportive and enthusiastic member of the greater school community, frequently attending sports and other events throughout the year. Bill Carpenter ’76 remembers how Sister Michel Marie came to all the home wrestling matches. “She was a fan of the classics,” said Bill, “and tried to impress upon us that both body and mind needed to be developed.”
As word of her passing spread on social media, former students fondly recalled her excellence in teaching, along with her intelligence, wit, and patience. She inspired many students to further study in English, and others recalled how much her writing instruction aided them in college and graduate school. Sister Michel Marie was one of those O’Connell teachers who will never be forgotten.
Religious, relatives and friends are invited to her Funeral Mass at 10:30 a.m., Thursday, April 3, 2014 at Camilla Hall in Immaculata, Pa. Visitation will held from 8:30-10:15 a.m. directly preceding the Mass.
Let us continue to offer our prayers for Sister Michel Marie and in thanksgiving to God for the gift of her life which she shared with our community so generously.
The Philadelphia Inquirer death notice can be found here:
http://www.legacy.com/obituaries/philly/obituary.aspx?n=MICHEL-GRAHAM&pid=170448327

Sister Michel Marie was my English teacher my freshman year of high school. She was a wonderful teacher and a warm and funny lady. She guided our early attempts at putting pen to paper, and instilled in many of us the love of the written word. Her favorite expression, "Close, but no cigar.". I can still hear her say those words these many, many years later.
I never knew she grew up in the same town where I grew up, Falls Church. We even shared American University as our alma mater. I know we shared a love of literature and writing. If I am able to string words together in any sort of coherent fashion, it is because of the steadfast efforts of this good woman...and a few of her fellow sisters. Rest in peace, Sister. You made it fun.

Enjoy the day,
Robyn
Posted by Mugwump Woolies at 10:21 AM